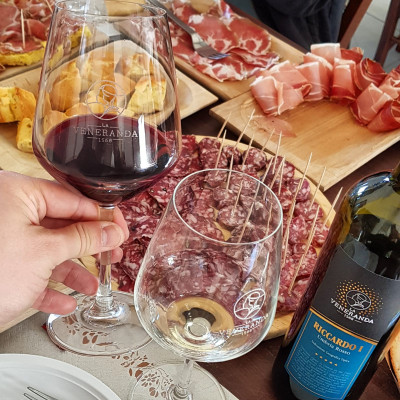 From €40.00
“A tasting of 7 wines paired with a rich selection of fine artisanal products at La Veneranda in the heart of Sagrantino” 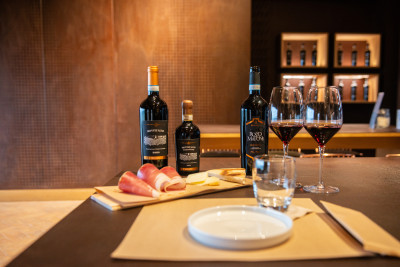 From €25.00
“Discover the territory of Sagrantino, taste its most representative products & learn about the philosophy and history of Cantine Briziarelli” 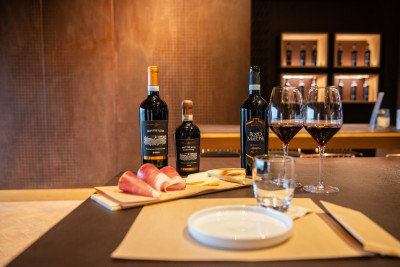 From €40.00
“An itinerary to discover the Sagrantino grape in all of its facets. Taste of 5 Sagrantino wines paired with a selection of local products”

From €18.00
“A small family winery with 100 years of agricultural tradition in Montefalco that produces living & wholesome wines with artisanal processes” 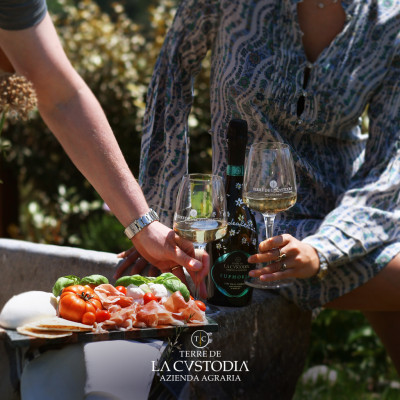 From €50.00
“The complete experience to taste all the products of the winery, with guided tour and light lunch.” 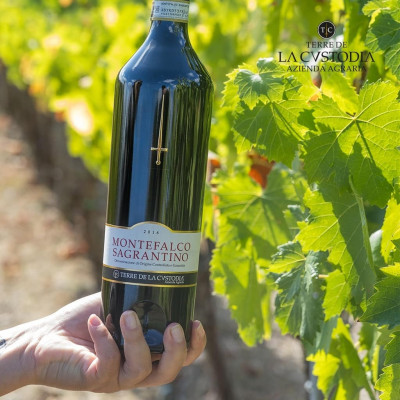 Wine Experience in the heart of the Montefalco district

From €25.00
“Treat yourself to a magical experience at Terre de la Custodia, with a guided tour and final tasting of 3 wines.” 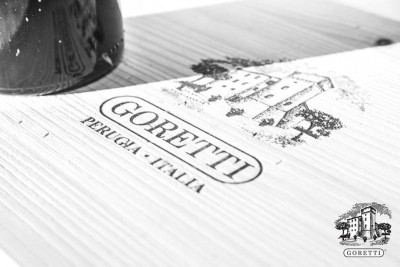 From €37.50
“Tasting of Goretti wines in a special room of the Tower, accompanied by typical Umbrian products and delicacies.” 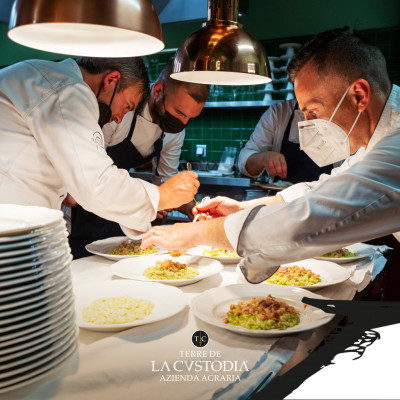 From €87.50
“Sensory journey through the scents and flavours of the Montefalco area” 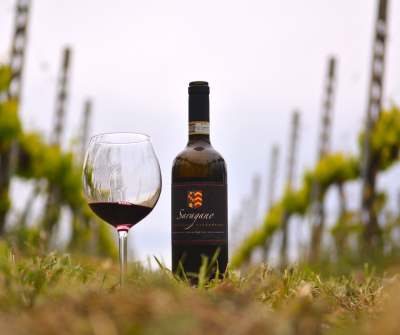 From €120.00
“Experience a day as a "Vigneron", feel part of a vintage of Tenuta di Saragano and taste the authentic flavours of the Sagrantino territory.” 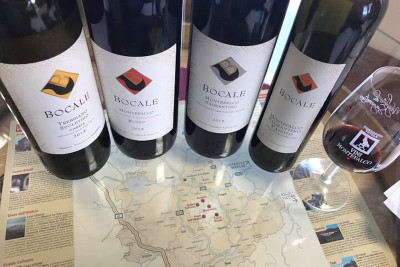 From €25.00
“Visit of the vineyard and the vinification and aging rooms and guided tasting with typical products included” 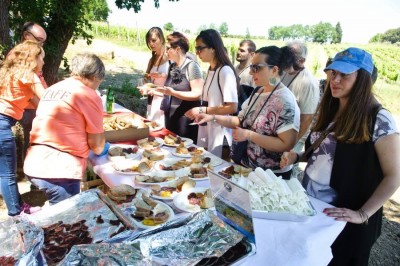 From €35.00
“A more intense winery tour accompanied by typical dishes of the Umbrian culinary heritage” 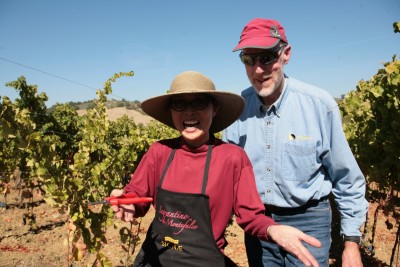 From €15.00
“Come to visit one of the most technologically advanced winery in Europe, surrounded by nature and medieval castles.” 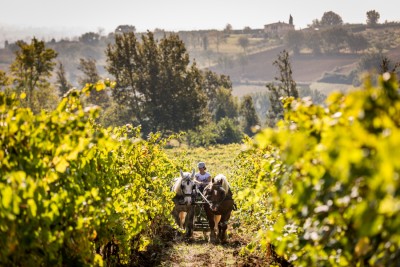 Private Trotting through the vineyard and appetizer on board

From €85.00
“The exclusive version of the trotting and food tasting on the carriage experience at Cantina di Filippo” 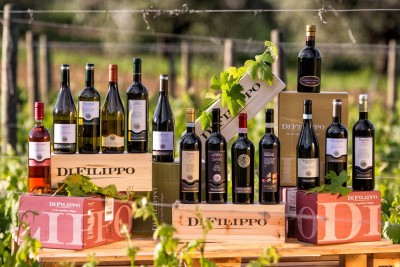 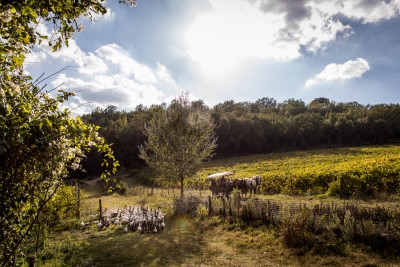 Trotting through the vineyard and appetizer on board

From €75.00
“Tour in the vineyard, stop with food tasting and than back to the winery for the wine experience! Welcome at Cantina di Filippo” 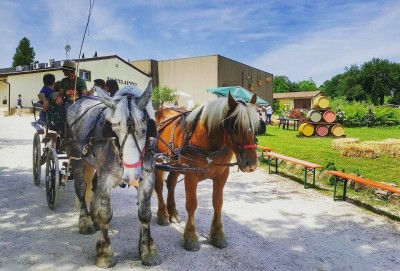 Exclusive trotting through the vineyards at Cantina di Filippo

From €60.00
“Enjoy a more romantic carriage tour experience of the Di Filippo Winery” 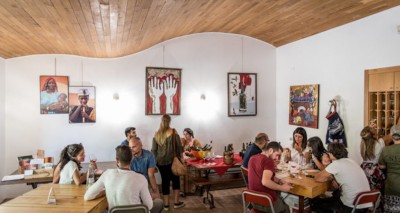 From €25.00
“A complete wine tour followed by the tasting of the Vini De Filippo labels” 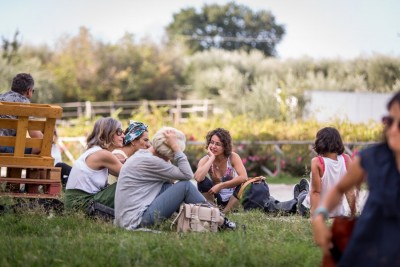 Organic picnic in the vineyard at Vini Di Filippo

From €40.00
“The perfect outdoor experience surrounded by the beautiful Umbrian landscape with a glass of wine and food to join every moment.” 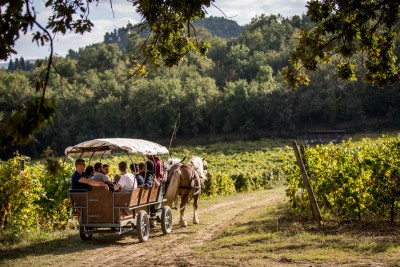 Trotting through the vineyards at Cantina di Filippo

Sagrantino is one of the two main wine production areas of the Italian region of Umbria. This territory, characterized by soft hills and short plains, is the perfect destination for wine travelers who want to discover the great wines of Umbria during memorable wine tastings and visits to the area’s historical wineries.

Sagrantino is the name of the most widespread black grape variety that can be found around Montefalco’s area in Umbria. During your wine tastings in this territory, you will have the opportunity to savor different wines produced with this peculiar variety, characterized by warm, fruity and tannic notes. Despite being small, Sagrantino’s area boasts two designations of origin; Montefalco DOC and Montefalco Sagrantino DOCG.

Which food to taste in Sagrantino?

While in Sagratino’s area, you will be able to experience some of the area’s excellences during your wine tastings. However, your visit to this Umbrian destination wouldn’t be complete without tasting some other specialties of this territory. Between winery visits, don’t forget to try some of the area’s typical dishes, such as lamb with black truffle, gnocchi with Sagrantino passito, strangozzi or strangolapreti, risotto with Sagrantino, Parmigiana di gobbi, pere al Sagrantino.

Which wines to taste in Sagrantino?

As the name suggests, the most widespread grape variety of this wine destination is Sagrantino, which you’ll have the chance to taste during your wine tastings and winery visits in the area. Present in the territory since the Middle Ages, the Sagrantino vine started gaining the fame of high-quality red wine in the nineties. Apart from in Montesanto, Sagrantino grapes can be found in Bevagna, Gualdo Cattaneo, Giano dell'Umbria and Castel Ritaldi. Other varieties that can be found in the area include Sangiovese, Canaiolo Bianco, Grechetto, Trebbiano Spoletino and Verdello.

Which is the best season to visit Sagrantino?

The best time to visit the land of Sagrantino is undoubtedly autumn, considering that Sagrantino is a full-bodied wine and the local cooking is rich in hearty dishes based on game and truffle. In this season you can fully enjoy this territory and visit Sagrantino wineries while temperatures are more pleasant and vineyards are tinged with autumn colors.

What things to do in Sagrantino?

Besides tasting the various shades of Sagrantino wine and visiting its wineries, during your time in this territory we recommend visiting some of its highlights, such as the village of Montefalco, Bevagna and its medieval towers, Marcellano’s castle, Barattano’s castle, the Rocca dei Borgia, Castel Ritaldi.

Which wineries to visit in Sagrantino?

See all wineries in Sagrantino on Winedering.com

Where to do wine tastings in Sagrantino?

These are perfect wine tastings to book in Sagrantino:

See all wine tastings in Sagrantino on Winedering.com